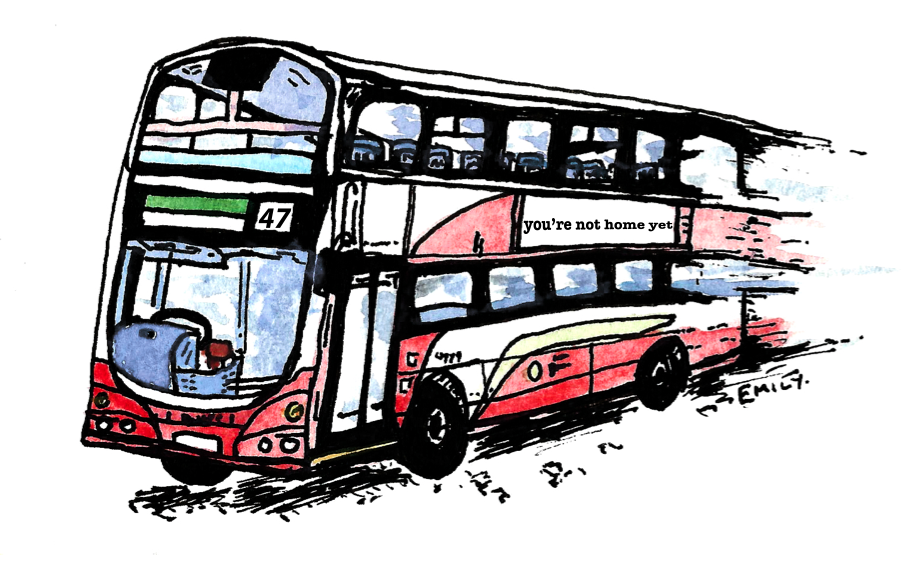 Derek stood by the bus stop, held down by the invisible weight of a Monday morning that pressed his being into the cracks between the pavements. The pause before the ensuing humdrum that would carry him through until the bus journey home. He gazed out sullenly, his bespectacled eyes focused on a distant reality that was not his. Swaying back and forth on his old Reebok trainers he rocked to the rhythm of the rush hour traffic. The air of the oncoming 47 bus, squeezed between shelter and pedestrian, knocked him from his daze.

‘Fuck’ uttered Derek, his small voice trailing off alongside his bus. He could have sworn the driver had seen him. As the scene continued to replay in Derek’s mind the more certain he was that the driver had had purple glitter flecked across his ruddy cheeks.

..the purple infusion of a melted Indian wedding, as sparkling fairies cascaded down the A56, shot from the bosom of love, aimed at the heart of Aphrodite, who, perched plumply over an olive tree’s spindly branch, yawned melodies of lust and leisure. Small looping pirouettes, 5-point turns, frills of a floral summer dress caught in a light wind..

The scene popped like bubble gum. It couldn’t have been; a Lothian bus driver with purple glitter on his face. Now he really had lost his mind.

The number 16 screeched to a halt minutes later depositing its silty load like the mouth of a great river. Passengers poured out with reckless abandon, freed of normal pleasantries or courteous behaviour. Derek struggled to maintain his position against the weight of those who crashed out onto the street. Fighting to keep ground he caught the eye of the bus driver as the last of them departed. He was an older man with peppered grey hair and a deeply creviced face.

The driver was wearing a chef’s pastry hat that grazed the interior roof. In his top breast pocket, sat awkwardly, was a set of what looked to be specialist knives. His large grizzled hands were covered in flour like fresh snow. Puzzled, he cocked his head to the side and exhaled a drawn breath. The driver beamed down at him, his deep eyes spoke of untold mischief. Derek, who could scarcely conceal a smile, allowed his own eyes to soften. Before he had a chance to address the situation or the driver, the door shut, clunking mechanically like an old dame’s purse.

Shaking his head from side to side, as if trying to shake unwanted thoughts like dust from an antique lampshade, he stood back. There had to be an explanation. Trying not to let the thought linger any longer he turned his focus to the bus timetable on screen overhead.

Another three minutes. If he were to walk quickly through George Street he could still be on time, just. Of course with the height of summer upon him and those early morning tourists to contend with he would need to jostle his way through the streets, though there was no time to consider this now.

He looked toward the road in time to see the 47 approaching. It swayed top heavy like an old tired burgundy couch on tiny caster wheels. Derek steadied himself once more and held out his arm with a renewed sense of purpose. The last opportunity to make it to work on time.

The bus rolled to a stop and the doors slid open. ‘Tickets please’ grunted the driver. Derek thumbed over the 90p ignoring any irregularities that could distract him. He caught a glance at of the driver’s hand as he pushed over the ticket. The fingernails had luminous green nail polish on them, and although it had be professional applied, he considered the whole thing a little peculiar, even if it were the Easter Road bus.

Instinctively, and against better judgement, Derek lifted his line of sight to meet the driver’s eyes and offer a vaguely polite thank you. The driver’s eyes were as black as rubber, the kind Derek trusted only in a close friend. The irises were piercing white. He felt they were drawing him in, the whole eye appeared to slowly rotate as if it were on spit, inducing an uncomfortable trance.

Derek grabbed the driver’s tie and pulled his face towards his own. The two were now inches apart. The words he wanted to shout were stuck in his throat like rice trapped in the kitchen sink. Derek’s eyes blinked rapidly as the driver’s mouth opened like a great hippopotamus.

..white doves flew out from the depths of that enormous mouth, circling overhead as grasshoppers leapt and their bandy legs kicked and tweaked rhythmically, the sounds of the Serengeti echoed all around as waves of locus thundered violently, bull frogs meeped and buffalos barked…

Derek released his grip of the tie and slid himself backwards; the worn synthetic polyester ran between his fingers. His body crashed into the listless passengers queued behind; none seemed remotely aware, nor bothered about the commotion in the drivers cabin. He landed with a slap on the street below and gave an easy sigh. The way these bus conductors conducted their lives was unprofessional Derek mused as people tread over the top of him towards the oncoming number 10. He would just need to resign himself to a taxi…

given the unusual circumstance of the morning.