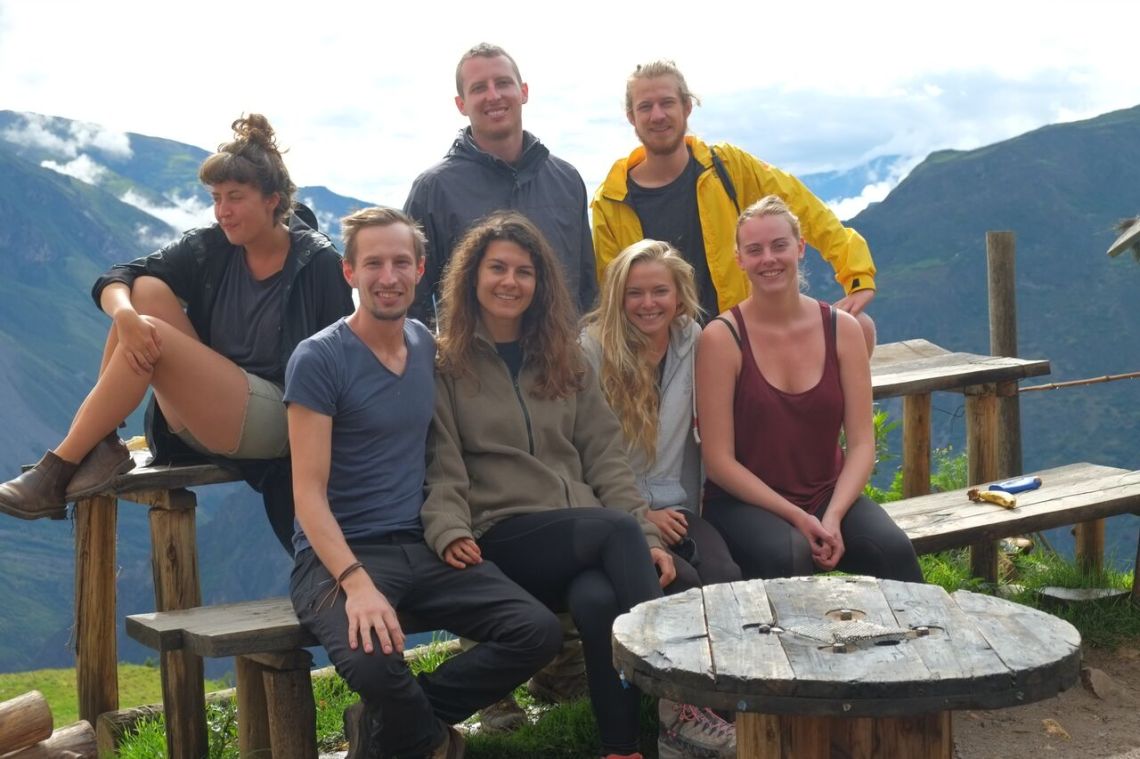 We awake early in the morning, the roof having sheltered us from the rain and the stars. As it is currently wet season we have adjusted to the almost mechanical precision of the weather fronts that roll in each day. Things are different this morning. The rains that should fall between 11-2pm have arrived many hours too early. We sidestep and shuffle between the tents, etching out future morning routines, all the while attempting to ignore the heavy wet clouds that are draped over Cachora like a sodden dog towel.

The taxi waits outside of the hostel and once more our day begins with a car journey. This time we have been recommended to take a ride to the very start of the footpath that leads to Choquequirao. It is apparently an advisable measure that mitigates some nine muddy kilometres of road riddled with bullet-hole like puddles. The taxi slides on the tobacco brown mud like an overweight ice skater on wobbly legs. The challenge at this stage is to appreciate the vast ravine that opens up on righthand side of the road, marvel only at its beauty, and remove any existential risk that your mind would like to honour. 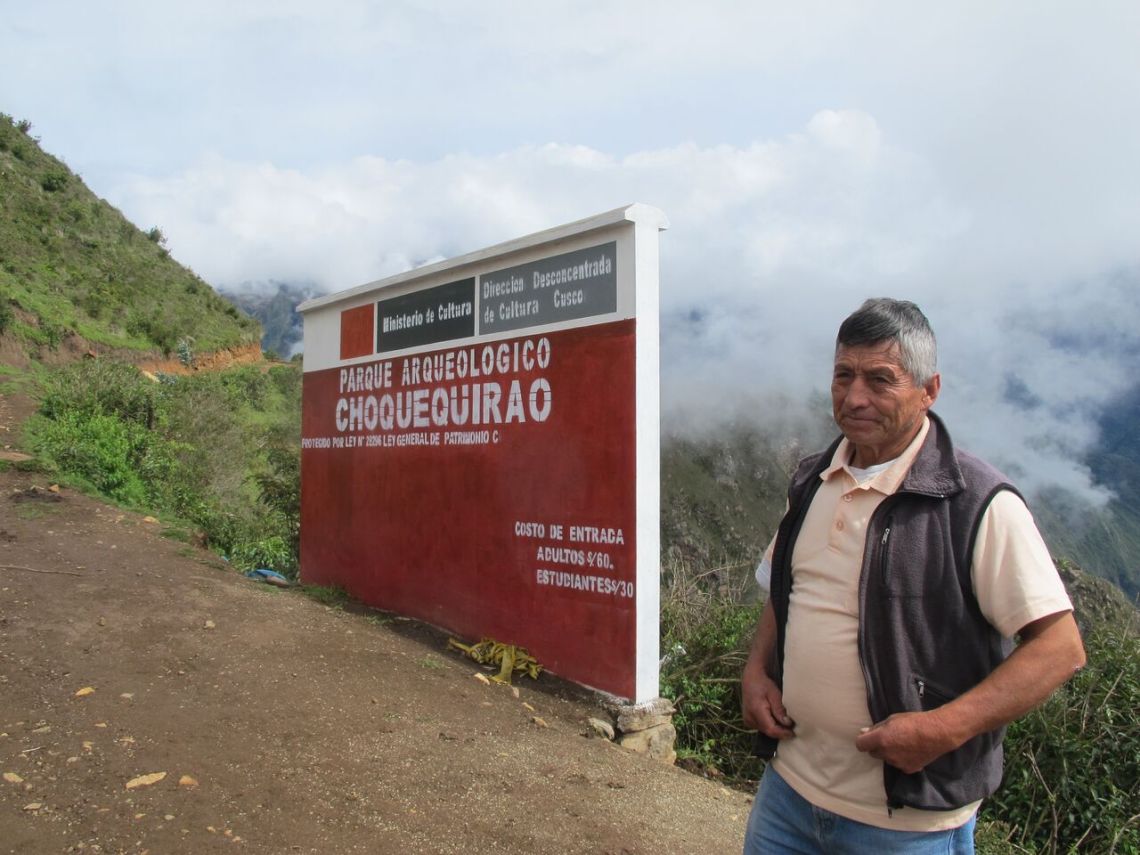 The road ends abruptly with only a little shop and signpost to mark the start of the trek. At this stage I could not have left the opportunity to purchase hiking poles to a more final moment. Unsurprisingly the gentleman does not sell walking sticks, but is kind enough to offer me a free bamboo alternative which is attached with just one proviso; I visit his relatives restaurant in Aguas Calientes. Showering him in thanks I agree knowing that the poll will be attached to my hands for the days that follow.

We start with a 1500m decent down the valley towards the river. The capricious nature of the weather has allowed the rains to turn the path into a mud chute peppered with erratic stones. The bamboo pole plunges head first into a space two foot in front of me, my body tenses under the weight and the legs squeeze tight as I tentatively pick my next spot. With each of us carrying between 8-15kg, depending on the spilt of the equipment, the task at hand is augmented and gravity feels far more fickle. The pressure in the knees builds as we continue down the doglegged path.

As we are descending from approximately 3000m to 1500m, the incremental temperature change can be felt every few hundred metres. By the time we reach the river, some three hours later, it is sweltering. My face and back have become a tributary of the Amazon; sweat pisses out with reckless intent. Any preconceived notion of obtaining some rest and relaxation by the river is nullified by the diligent horse flies and mosquitos that attack with ferocious capacity. I sit scratching until blood spills from an open bite. 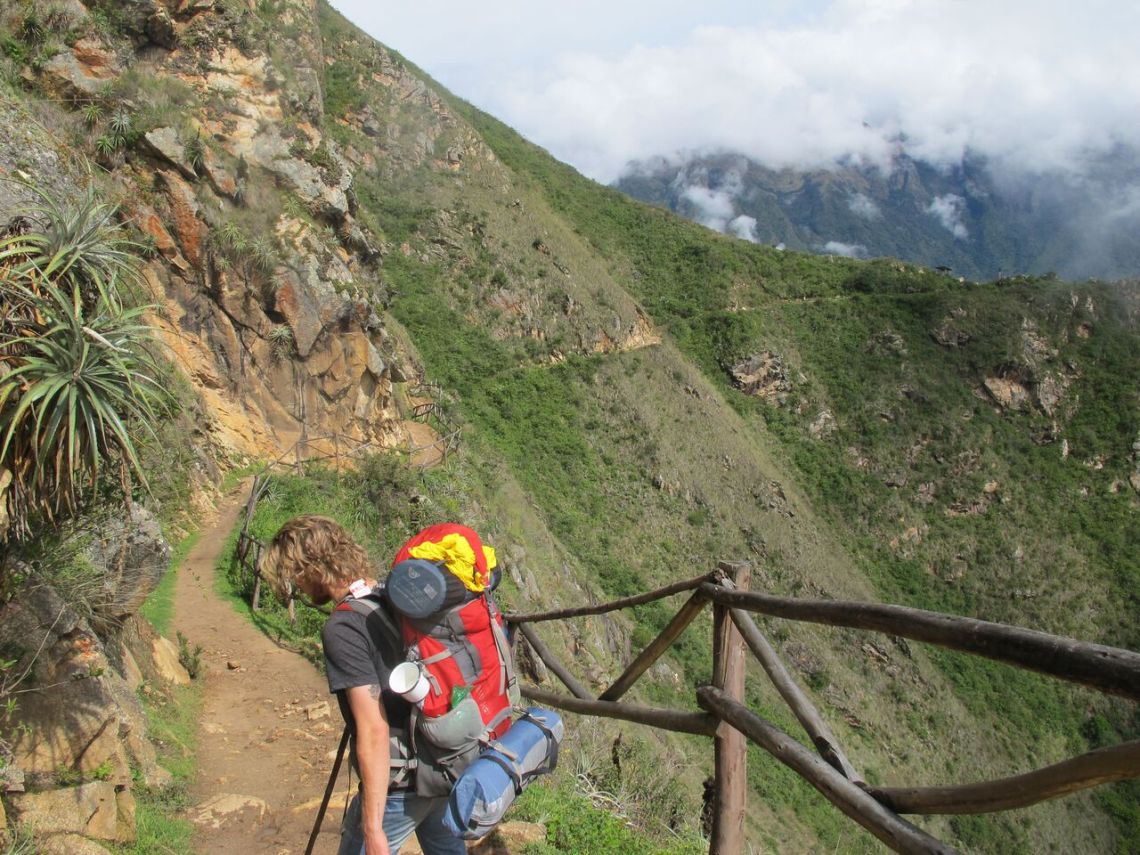 Feeling that relaxation is quickly turning from unlikely to impossible I leave with one of the Sarah’s to start on the ascent. I plug myself into a Ram Dass podcast. One ear on the spiritual path, the other semi-focused on the actual path. Just like the descent the climb is a tough zigzag that crawls further and further up the valley wall. The more physically demanding it becomes the more my mind grasps at Ram Dass in a bid to mitigate the constriction of lactic acid that builds in my legs. My attention feigns as I lift and unconsciously aim a left boot on a large grey stick that has appeared before me. As my foot falls the stick coils up into a smooth rounded ‘s’ shape, the kinda ones you aspired to in primary school that you now accept you’ll never succeed in replicating. There is a flicker of realisation as I’m ripped from my spiritual ascension and back to the reality that is my boot and un-trousered calf now hang mercifully close to the this serpents puss. Despite the sheer weight of my rucksack I spring back like an antelope on the Serengeti, leaping some three-foot to avoid the snakes’ range.

An adrenaline dump courses through my body and the vital energy that would have aided my assent now shoots through to my extremities with feverish pace. It echoes and crashes against the sides of my form as I stand in a catatonic state aware of my rapidly diminishing energy banks. A feeling of consternation flushes through my cheeks. There is little time to consider the mortifying and slow death I would have been subject to if the snake had succeeded in ploughing a fang into my hairy calf.

I eventually catch my breath as my eyes trace the meandering snake’s line through the gorse bush that decorates the trails’ edges. After a pause I continue upwards, my breathing finding a more natural and drawn state. As the physical exertion reaches its peak there is a wall of endorphins that hit like an out-of-sync wave on an island break. For the second time in an hour I have a huge buzz of energy as a full smile stretches across my face. Exhilarated, the valley appears wider and more open with every few metres climbed. 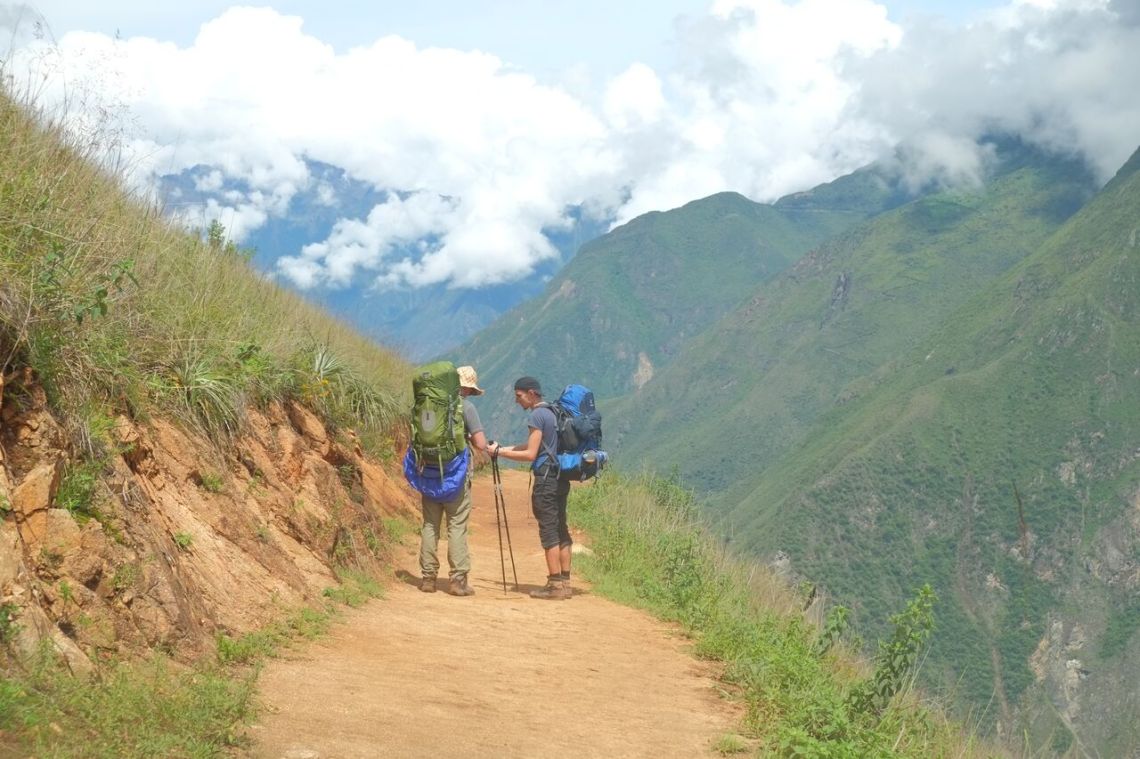 I am the first one to reach the campground, Santa Rosa Bajo, were the owner declares the next campground some 200m higher is closed. I’ve been told to expect as much. Reviews online tell of a deceitful man prepared to coax tired travellers from squeezing a couple of hundred metres out of their lactic acid laden legs for a better position the following morning. We wont take it. Striding fourth, tired and sweaty, we push on to Santa Rosa Alto.

No lies, no malice, just the truth – it is closed. Sitting down with the Andes square in front there is no point in complaining about the mistake. The others trundle up over the next hour, some more tired and dejected than others, and eventually one of those is the campsite owner. An elderly man with deep ravine like wrinkles on his forehead and yellowish ivory teeth, he stands very calm and gentle. Showing us where the facilities are I sit back as the others listen and melt into the ground. 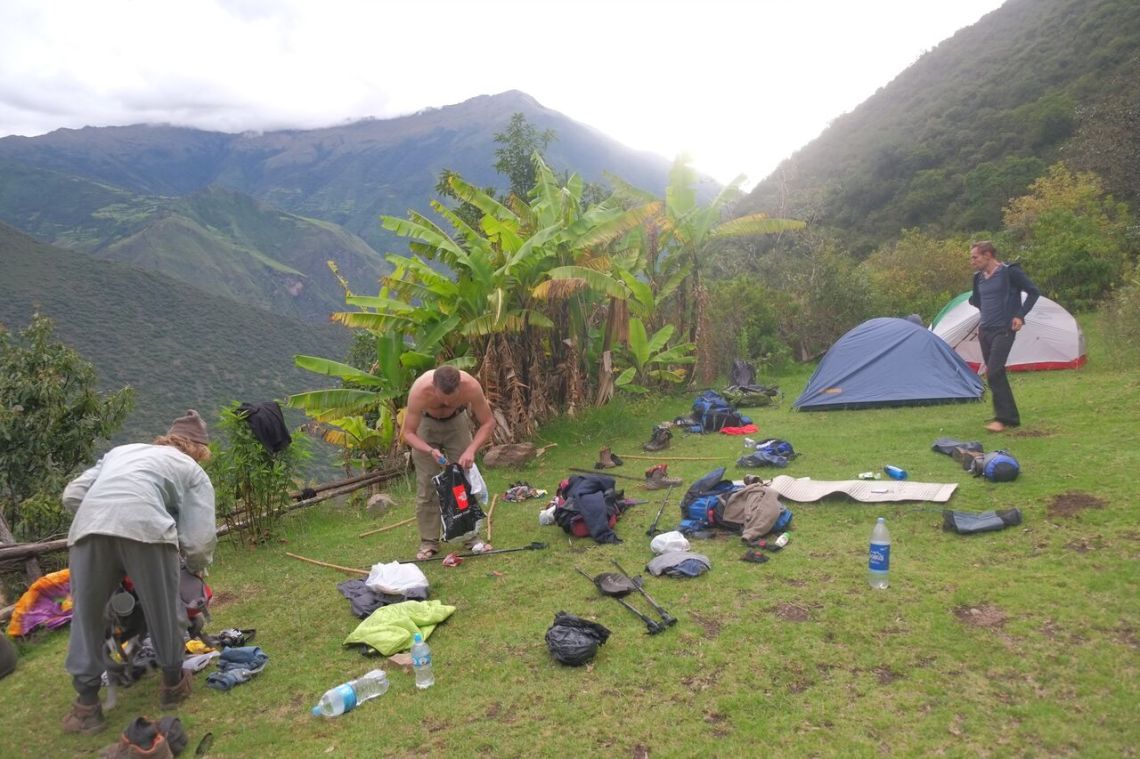 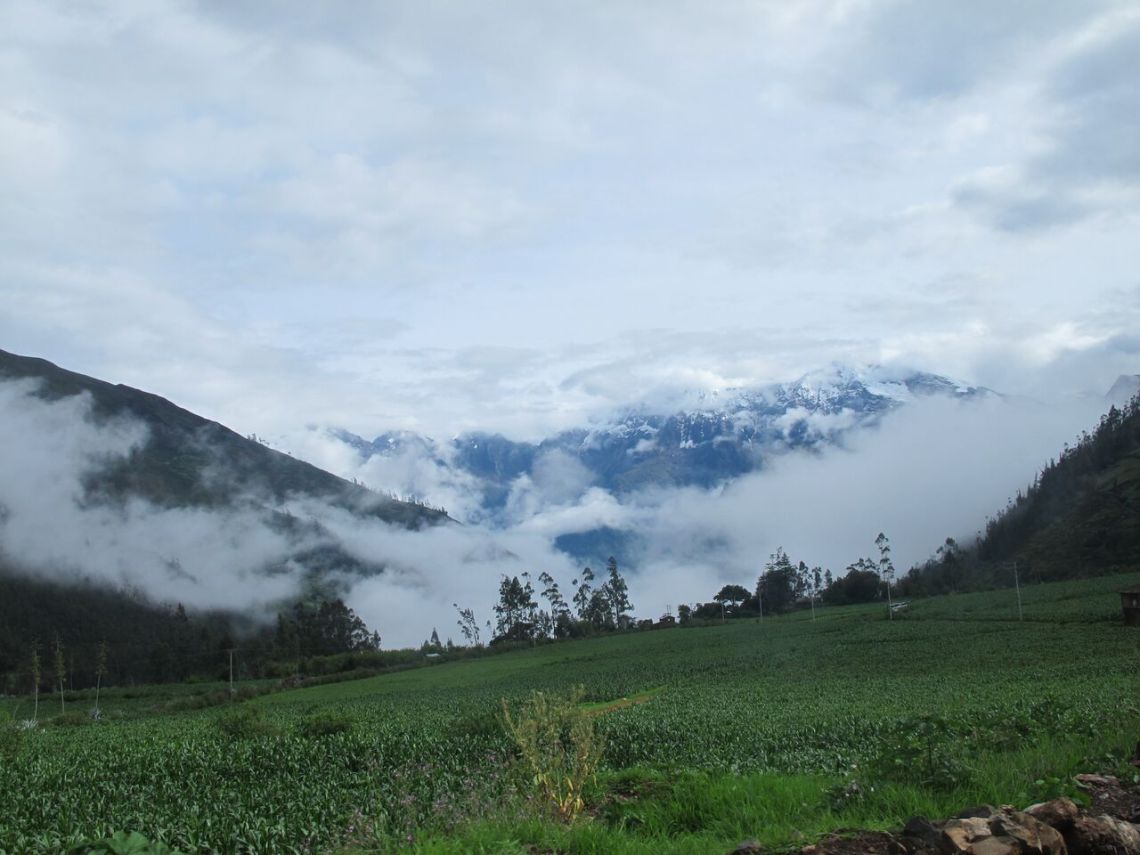